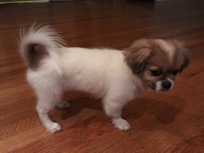 Coco is a smart and adorable Tibetan Spaniel puppy; she is 4 months old in this picture.

Coco is very smart and quickly learned many commands such as “sit” and “wait.” 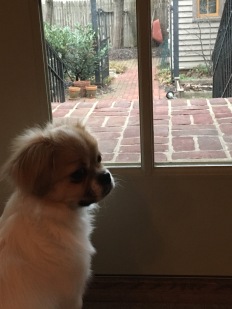 At the same time every day, Coco waits at the door for my dad to arrive home from work so she can be the first to greet him! 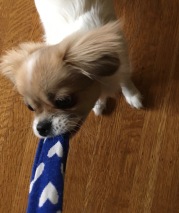 Coco is quick to act when she spots an abandoned sock lying on the floor.

Coco, at 12 weeks, on the day we brought her home. She found some flowers that she liked and decided to pick them!

Happy Valentine’s Day! We have a new love in our lives and I have been very excited to write this post for many months. In September of 2016, we brought home a 12-week-old Tibetan Spaniel puppy. We named her Coco Cuddles, and she is adorable, sweet, and cuddly.

Tibetan Spaniels are a rather uncommon breed, but we have found that this particular breed suits our family perfectly. Coco is loving, lively, alert, smart, playful, and sometimes mischievous. As their name would suggest, Tibetan Spaniels originated in Tibet. They are a very old breed; they are depicted in Asian art dating back to 1100 BC.

Tibetan Spaniels can be many different colors with various markings, but our Coco is  parti colored, meaning that she is a mix of different colors – she is white with light sable markings. She is almost 8 months old now and weighs 8 pounds. Her adult weight will be between 13 and 15 pounds, so she won’t really gain much more weight.

By now, you’ve probably guessed that the word cynophilist has something to do with dogs! Cynophilist comes from the Greek roots cyn-, meaning dog, and phil-, meaning love so the word means “dog lover.”

Are any of you cynophilists?

Hi, I'm Tara! I am a 16-year-old linguaphile who loves exploring the origins of words in the English language. Every word has a story waiting to be explored. Let's explore these stories together!

Happy fall! 🧱 #saturdaystems
Happy October! Halloween is just around the corner and we want YOU to help us celebrate by SHARING your love of reading. 👻
Happy Saturday! #saturdaystems