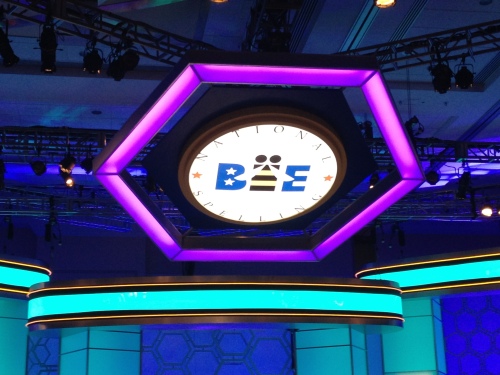 The 2014 Scripps National Spelling Bee has finally arrived!! Today spellers had to endure two rounds on stage in front of bright lights, a big crowd, cameras and reporters. Spellers have two minutes to spell their words. On stage, the spellers see a stoplight that changes colors depending on how much time they have left. Once the stoplight gets to red, it means they have 30 seconds to spell their word. I found this to be very nerve-racking when I stood on stage as a participant in the 2013 National Bee.

46 of the 281 spellers will proceed to the semifinals tomorrow morning at 10:00 a.m. EST on ESPN2. Semifinalists are chosen based on a combination of their score on a written spelling and vocabulary test taken yesterday and on stage spelling today. The highest combined scorers at the end of Round 3 advance; a maximum of 50 spellers are able to advance.

The championship finals are scheduled for tomorrow evening at 8:00 p.m. EST on ESPN.  My favorites to win this year are Vanya Shivashankar, a seventh grader from Kansas or Sriram Hathwar, an eighth grader from New York. This is Vanya’s fourth year at the Bee and she tied for fifth place last year. Sriram tied for third place last year and this is his fifth and final year of competition. Do you have a favorite?