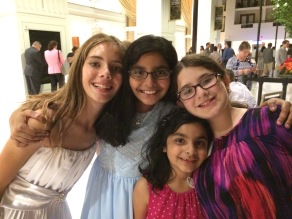 My new friends, Ella from Kansas, and Shayna from Indiana.

We danced ’til midnight!

The dance party was the last time to get autographs.

Spellers had their own tables in the front of the ballroom.

The National Air and Space Museum was very interesting.

The morning after the Championship Finals, spellers had the opportunity to explore D.C. We decided to go to the National Air and Space Museum which was interesting.

That evening, we attended a fancy Awards Banquet, at which we honored the ten finalists. Afterwards, we all went to the Cherry Blossom Ballroom for a dance party that lasted until midnight!

Participating in the National Spelling Bee the second time around was more fun because I knew what to expect and spelling on stage wasn’t as overwhelming as my first time. The Bee is a great place to meet kids from all over the world and forge friendships that will last a lifetime! It was amazing to be surrounded by so many people who share my love of words!

I hope you all enjoyed the Insider’s Guide to the 2015 Scripps National Spelling Bee. I know that I certainly enjoyed writing it!

Spellers invited to sit on stage during the Finals each received a unique commemorative pin.

Speller #140 Gokul Venkatachalam is from Missouri. This is his 4th year at the Bee.

Speller #90 Vanya Shivashankar is from Kansas. This is her 5th year competing in the Bee; her sister Kavya also won the Bee in 2009.

I watched in amazement as these two spellers exhausted a list of 25 extremely difficult championship level words! Gokul spelled the word nunatak for the win. Nunatak is a hill or mountain surrounded by glacial ice. On the road to the championship, Gokul also spelled filicite, Sprachgefuhl, nixtamal, and pipsissewa. Vanya’s winning word was scherenschnitte which is the art of decorative paper cutting. Along the way, Vanya also had to spell zimocca, tantieme, urgrund, and Bruxellosis.

It takes lots of hard work and dedication to just qualify for the National Spelling Bee so I’d like to say congratulations to every single speller who participated this year!

Spellers have 2 minutes to spell their word. When the light turns red, spellers have 30 seconds to complete the spelling of their word, or be eliminated.

Dev Jaiswal of Mississippi spelled both his words correctly and will advance to the Champion Finals tonight. 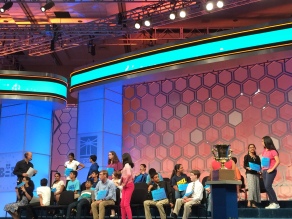 During commercial breaks, spellers got up, stretched, and talked amongst each other.

Each time a semifinalist missed a word in the semifinals, the other spellers would give him a standing ovation.

The Championship Finalists each received a medal.

The Semifinals were suspenseful and full of excitement! I got to sit in the front row with other spellers so I had a great view! Last night, all 49 semifinalists had to take another written spelling and vocabulary test (this was Round 4 of the competition). Rounds 5 and 6 occurred onstage this morning and lasted about 3 1/2 hours. After Round 5, 38 semifinalists remained. There were 21 semifinalists after Round 6. Some examples of words that flummoxed spellers were diamante, syrette, eupyrion, and calefy.

During the Championship Finals tonight, a speller from every state (or country) has the privilege of sitting onstage. I was chosen to represent Kentucky, so if you are watching, you might just see me on stage!

Outside the Maryland Ballroom, many spellers are asked for quick interviews by various media people.

Here I am with Cy Orentlicher and his sister, Shayna. I first met these 2 in 2013! Cy is a semifinalist this year and Shayna is probably the youngest person with media credentials at the bee.

I was asked for an interview by USA Today.

This morning, Round 2 of the 2015 Scripps National Spelling Bee commenced. Contestants had to spell words under incredibly bright lights, cameras from every angle, and, of course, tons of pressure. Not very many spellers missed their onstage word in this round. However, a few contestants did misspell their words and were eliminated from the competition.

Round 3 started with 279 out of 285 spellers. The Round 3 words increased in difficulty and many more contestants were eliminated in this round. At the end of Round 3, there were 214 spellers left.

I correctly spelled the word “regatta” in Round 2 and “ochlophobia” in Round 3.

After Round 3, the semifinalists were announced, however, my name was not called. I did not accrue enough points to proceed to the Semifinals. Even though I won’t be participating in the Semifinals,  I am looking forward to watching them tomorrow morning and cheering on the remaining 49 spellers. You can watch all the action on ESPN2 tomorrow morning. Go to spellingbee.com for details.

After the Semifinals announcement, all of the spellers got an awesome surprise! Since Microsoft is a sponsor of the Scripps Spelling Bee, we all received a Microsoft Surface 3! Thank you Microsoft!!

After an exhausting day, I did an interview with WHAS-TV over Skype and now I’m really, really tired so I’m going to bed! Good night!

Here I am waiting for the test to begin.

All 285 spellers took the preliminaries exam at the same time this morning.

Rounds 2 and 3 will also occur in the Maryland Ballroom of the Gaylord Convention Center.

This morning we gathered for an assembly. We were introduced to Scripps staff as well as Bee officials including the pronouncer, Dr. Jacques Bailly, and the head judge, Mrs. Mary Brooks. Kate Miller, who was a finalist last year, reviewed the rules of the spelling bee and gave us some suggestions about what we should do for the on stage portions of the Bee.

Round 1 began shortly after the assembly. All 285 spellers took the exam at the same time this year. The preliminaries exam consisted of 26 multiple choice questions which included both spelling and vocabulary. The total number of points that could be earned in this round is 30. A speller needs to do well on this exam in order to have a chance at advancing in the bee because the points from this round are added to points earned on stage during Rounds 2 and 3 tomorrow. However, if a speller misspells on stage, they are eliminated. Only a maximum of 50 spellers advance to the semifinals; these people are the highest scorers through Round 3 of the competition. Some examples of spelling words we were asked were meunière, tarsorrhaphy, and schmierkase.  Using my root word knowledge, I was able to figure out the definitions of words such as viridigenous (producing greenness), and hypercryalgesia (excessive pain due to cold) but there were many other words I didn’t know.

I think that many of the spellers would agree with me when I say that the exam was extremely difficult. I tried my best and I now know that I need to study more word roots as well as language patterns. We will find out the results of the exam tomorrow afternoon.

The highlight of the day was when 3 of my grandparents arrived to cheer me on! I hope you all will be able to watch Rounds 2 and 3 tomorrow on ESPN3. I am speller 93.

In the pavilion area, spellers and their families enjoyed delicious food and interesting conversation.

My sister loved the arts and crafts area the most.

Many spellers enjoyed dancing at the barbecue.

Creating sand art was a popular activity among spellers.

It was a beautiful day to be outside and enjoy the Memorial Day Barbecue with the other spellers and their families. There were plenty of activities to keep us occupied for several hours today. People entered dance contests, played volleyball, or engaged in arts and crafts activities. Face painters and caricature artists were also on hand to paint faces and draw humorous portraits. I entered the hula hooping contest and was not the first person out!

This was also a great opportunity to socialize with the other spellers and, of course, collect more autographs in my Bee Keeper. Tomorrow is the first official day of competition; it begins in the morning with the preliminary written exam (Round 1). On Wednesday, Round 2 and Round 3 will occur on stage and will be live streamed on ESPN3. If you are interested in watching these rounds, please go to spellingbee.com for the broadcasting schedule!

One of my favorite spellers is Vanya Shivashankar.

Dev last competed in 2012 as a 5th grader and has returned as an 8th grader this year!

The Bee Keeper is one of my favorite bee traditions.

All the spellers received t-shirts at orientation along with a bag full of bee souvenirs.

Paige Kimble is the executive director of the Scripps National Spelling Bee.

Spellers collecting autographs in their Bee Keepers during orientation.

Early this morning, I left Louisville to begin my journey to the Scripps National Spelling Bee.

The main event today was a speller orientation at which we learned about the schedule of events and activities planned for the week. This was also my first opportunity to meet the other spellers and it was so exciting! I saw some familiar faces and met lots of new people. Being here among these amazing spellers reminded me of why I have studied so hard to qualify for the Bee again.

The most important thing that happened during orientation was that all of the spellers received their Bee Keepers! One of the great traditions of bee week is the Bee Keeper which is a picture book with fun facts about each speller. Collecting autographs of spellers in my book is my most favorite thing to do during the week!

My amazing English teacher, Dr. Dworin, made this poster for my send-off party.

This week was very exciting for me because I was interviewed by Melissa Swan of WHAS11-TV for the evening news. My school also surprised me with a send-off party, which included chocolate ice cream and an original song written and performed by the elementary school students. I felt really honored when I received a gigantic poster made by my wonderful English teacher and signed by lots of students and teachers. I love everyone at my school because they all support me and are so thoughtful.

Bee Week is a very exciting time, and I would love to share my experience with all of you. Therefore, I will be writing a series of posts called the Insider’s Guide to the 2015 Scripps National Spelling Bee. I hope you will join me on a memorable journey of a lifetime!